CMC, the first indigenous religious congregation for women in the Syro Malabar Church, was Founded as the Third Order of Carmelites Discalced on February 13th 1866 at Koonammavu, Kerala by Saint Kuriakose Elias Chavara (1805-1871) with the cooperation of Fr. Leopold Beccaro OCD. 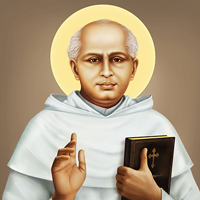 The first members of the convent were Mother Eliswa, Sr. Anna, Sr. Thresia and Sr. Clara. The first convent-panamhumadom (bamboomat convent) was built on the property of Sr. Anna. Within one year a new convent was built near to the Koonammavu Monastery by adjoining a piece of land belonged to the monastery and two newly purchased land from other two neighbours. Before the fruition of Fr. Chavaras long cherished desire for founding a convent for women at Koonammavu, he had made two attempts for the same purpose at Alangadu and Puthenpally. The introduction he gives before narrating the facts regarding the foundation of the convent testifies his ardent desire. He says that it seems that God has willed to accomplish now, the matter of a convent for nuns which was prayed for a long time and still was not possible. Fr. Chavara envisioned the spiritual renaissance and holistic wellbeing of the people of God through the initiation of the congregation. Rooted in the Indian Culture, nourished by the heritage of St. Thomas Christians. CMC took its form as an offshoot of the Carmelite family.

On 20th May 1887 by the decree Quod iampridem of Pope Leo XIII, Syro Malabar Christians were separated from the Latin jurisdiction of the Archdiocese of Verapoly and established Syro Malabar dioceses of Trichur and Kottayam. This was a turning point in the life of the then infant Congregation. Both Latin and Syrian bishops claimed the jurisdiction of the convent at Koonammavu and on 18th April 1890 verdict reached from the Holy See entrusting the convent under the vicariate of Trichur. As a result, on 17th September 1890, there occurred a bifurcation and Latin sisters went to the vicariate of Verapoly and later came to be known as Congregation of Theresian Carmelites (CTC). With the reorganization of the dioceses of Trichur, Ernakulam and Changanacherry in 1896, the Syrian section got divided into independent units, each of which was directed and patronized by the Local Ordinary of the respective diocese. The further bifurcation of Emakulam and Changanacherry into Kothamangalam and Pala paved the way of forming new units of the Congregation. All the five units were growing independently under the patronage of Local Ordinaries guided by its own Mother General.

The great event of the Unification of the above independent segments of the Congregation under one Mother General took place on 16th November 1963 with the guidance of Papal delegate late Msgr. Hippolytus OFM Cap, who later became the first bishop of Jammu-Kashmir. The Congregation was raised to the Pontifical status by the Sacred Congregation for Oriental Churches on 2nd March 1967 under the new name. Congregation of the Mother of Carmel (CMC). Thus after a century of independent growth, the Congregation started her united full. Hedged onward march into new avenues of love and service. Today CMC renders her faithful service in four continents like Asia, Africa, America and Europe with much dedication. The pharism of CMC can be summarised as the personal sanctification through the blending of contemplation and action as well as the redemptive uplift of the people of God principally of women and children.

The apostolate of CMC encompasses four major fields namely Faith Formation, Education, Healing Ministry and Social Work. The faith Formation ministry of CMC is rooted on the vision of Saint. Chavara Kuriakose Elias about the spiritual resurrection of the people of God. Thus prime duty and goal of the establishment of the congregation is to enable the people of God to understand the meaning of Gift of faith and also help and support them to worship God in spirit and truth and lead them to infinite bliss of mystery of the salvation of Christ. Thus they have to grow up to Christ in personal perfection and through them the world towards Christian formation. The Proclamation of the Word of God, Catechesis, Parish Ministry, Mass Media and Publications as well as the Renewal of Families are the major streams of the Faith Formation apostolate of CMC.

The apostolate of education is a heritage CMC has inherited from her founder lathers. The congregation entered the education field of Kerala informally in 1867 keeping aglow the vision of Saint. Kuriakose Elias Chavara, who opens the portals of education to the church in Kerala. The guidance of Pr. Leopold Beccaro OCD, the co-founder of CMC was also a constant source of inspiration for her while working in this field. Each and every sister is obliged to dedicate herself whole-heartedly for the uplift of the people especially women and children. St. Chavara dreamt about the possible transformation that education can bring about in individuals, families and the society at large. As a means to realize that dresim Eclukhimdats for girl children were begun. According to the demand of time CMC contributed maximum in the educational scenario both in the field of higher education and school level education. In mission areas Local Medium schools for the poor people of the area by utilising the facilities of the English medium schools are paving a new path for the development. CMC has generously set apart our human and material resources for progress in this field.

The Social Work apostolate of CMC envisioned building up a harmonious society, where everyone enjoys the dignity of life, a life in love, peace and justice as the citizens of the Kingdom of God. The major mission of this apostolate is to building up safe and secure families and communities in the Society, by liberating them from all kinds of bondages and enables them to lead a dignified life by concentrating the women and children through the personal and community programmes for their empowerment. The frontier ministries of CMC includes HIV/Aids centres, City based evangelisation, Shelter Homes, programmes for railway Platform I Children and Slum Children, SHGs, Saradhi Programme for auto rickshaw drivers, Migrant workers movement etc.